OMG I remember this day so vividly. We were shooting a trailer for a movie that actually got purchased by some hollywood big wig…. and then put on a shelf. ::sigh:: showbiz. It’s funny reading this and talking about John as my boyfriend. hehe.

Today started out ROUGH.  I got to bed after shooting a promo at about 1am.  I had to wake up at 4:30am to get to a shoot with a call time of 6am.  Yuck.  I waited for a train for almost 40 minutes, and then ended up hopping in a cab for an expensive ride.  I was cutting it close, but barring any mishaps would be able to get there only 5 minutes late.

Then the cab breaks down…. 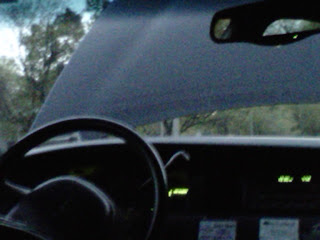 I was 15 minutes late.  Doesn’t look professional, but I didn’t even go into my explanation because at this point, an explanation would just seem like an excuse.

I had a headache (probably from lack of sleep, food, caffiene) and was annoyed about having to shell out $$ on that cab.  I was down from not seeing my boyfriend since thursday night (and we live together mind you) and not being able to see him until Sunday night due to our crazy work schedules this weekend.  I was holding on to these ugly feelings, and feeling down on myself, wallowing in the self pity.  (silently/internally of course, because, I’m at “work” after all)… And worst of all, I couldn’t find a cozy spot on the set (a big beautiful house) for me to hide away and nap in.  WTF!

I figured it would just be one of those days.

Then something wierd happened.

I picked up my phone to bbm my guy, and Pandora was on.  Now, I always forget to lock the keypad, so whenever I take my phone out it’s either dialed someone or bbmed someone…but it’s never turned Pandora on before.  It was on my Dinah Washington station…..which is NOT the channel that was playing the last time I used Pandora…..(it was on my elephant man station last night so i would stay awake on the train getting home!)

The wierdness of this cut through my gloom.  I felt like the universe was like “oh shut uuuup will you?  Here, lemme throw you this bone so you’ll remember what the effin deal is!”  I put in my headphones and listened to Dinah serenade my blues away, and immediately found a spot in the basement of the house we were shooting in to hide and snuggle up and nap!  After dozing to Dinah, Billie…and the gang…I was headache free, and in such a better place energetically.

Suddenly the world was all pink and rainbows and butterflies again.  I felt so grateful and so filled with love for everything and everyone. HA!  The Pandora episode saved me today.  Seriously.
It made me realize how simple it is to get dragged down in the mire of negativity, and remember how incredibly simple it is to pop right back out of it.  It sounds over simplified, but it really is a choice.  We decide to feel “blah” or “yay.”  This morning until the Pandora episode (i like the sound of that) I was choosing to swim in the murky swamp of yuckness when an equally accessible choice was available.  I could have just as easily decided to let it roll off me.

What do you do to snap out of a yucky mood?

I go for a walk ig I am in a crappy mood. Even a short walk helps. I het out and enjoy the wonder of the world. I dont take a phone, its me and the dog. .

I remind myself that this is the only life I have,(that I know of) I don't want to spend it feeling sorry for myself or angry. That's no kind of life to me,

I am glad that you got out of your yucky mood, but usually getting to spend time alone and going for a walk clears my head and my dog Biggles is so comforting to me when I am not in a good mood. He snuggles up to me and makes me feel better!

Sooooooo glad you posted this. The last few weeks since I've been back from vacation have been blah. Great reminder!

Uh oh, that post vacay depression can really get ya huh? Well I hope you get out of your blahs soon and start feeling great again. How's lil baby treating you in there?